Ok, so February was cold with lots of snow so of course I spent most of the month shoveling and, in my “down time”, ordering and collecting supplies. I really didn’t mind the cold winter because the snow was light and relativity easy to shovel. The greenhouse seems to have held up well and is warming up during the day even without the wood stove on. On average it’s running at 12-16 degrees C during the day. With the arrival of the seeds, I must admit I had a ‘what have I done?’ moment. I now have roughly 100+ varieties of vegetables to seed, transplant, weed, water, bug protect and harvest. I may have to get some help or at least look into cloning myself. (Then I won’t have to pay minimum wage to myself)

The greenhouse is basically ready with just a couple of little things to take care of including getting the chimney set properly on the wood stove. At this point it works great on calm days, but if the wind comes up it pushes the smoke down the chimney and into the greenhouse. You can imagine the ‘smoky flavoring’ my clothes have picked up…

I must say that with all the snow I’m a little disappointed that I didn’t get a chance or make the time to build a snow man or something. It was not like I wasn’t moving it around between shoveling a path to the greenhouse and the drive way to the more important shoveling around the greenhouses. As the snow piled up it got to the point where it wouldn’t slide off the roof. At that point, out came the shovel. Hey, with 120 feet to shovel at least I don’t have to worry about a gym. The frustrating part was that, with the almost continuous windy conditions it either snowed or blew over my freshly cleared path every day. 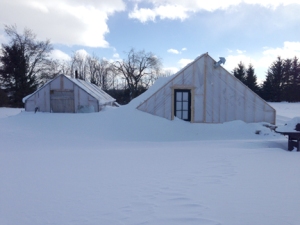 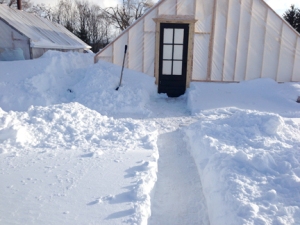 That’s not to say it was all bad. The cold should have a definite effect on the bugs this season. Also I took some very pretty pictures without a ‘real’ camera, and Abby and I did some snow shoeing together and even a few friends came out.

So, I can honestly say I’m looking forward while trying not to get ahead of myself. March will bring some new changes and decisions. I will start to seed some vegetables for the summer and some others, mostly greens, to grow in the floor of one of the greenhouses. If all goes well we should start to have lettuce by the end of April. I’ll also be getting some flowers and other plants started for sales in May.  Along with that there is wood to collect to keep the stoves going and gravity fed watering system to build along with collecting water and keeping an eye on the fields to get the spring plantings started as soon as possible. There is also manure to spread so it’s going to be a busy month but I’m really looking forward to it and obviously the arrival of spring.