I mean new equipment. This week has seen a couple of firsts. The new wheel hoe has arrived. This new piece of equipment is based on simple technology used when my father was a boy working the farm. He suggested it to me and I must say that it’s going to make hoeing much easier.  I also got a new seeder that attaches to the wheel hoe,  that should make things, if not easier, at least a bit more uniform with less waste. 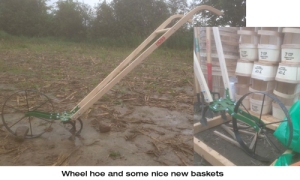 In the war on the beetle and other bugs, I am happy to see reinforcements arriving: the ladybugs have begun to appear and there have been a couple of toad-spottings. Nancy stopped by with some info and supplies to build some cucumber beetle traps but it needs to stop raining before I can try them.

An organic grower the other day suggested row covers. I have ordered some and they arrived so I seeded the rest of the cucumber seeds in the field and put on the row covers. 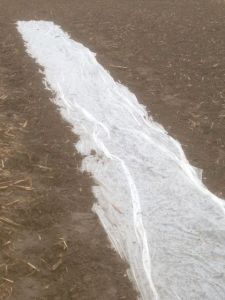 They work by letting light and rain through but the bugs can’t get in. I’m not sure how I feel about this from a sustainability standpoint, I have  to do more research. It seems that in a way we are affecting an eco-system, sort of making a sterile environment for the plants, which to me leads to weaker plants in future generations.  It also goes against my eat-a-little-dirt-every-day belief – a little bacteria and dirt help make a stronger immune system. I could be wrong but it has worked so far.

As Abby’s dad says about eating wild mushrooms “I’ll only be wrong once.” I guess the “once” should worry me but…

As to how things are growing, well, slowly. It has been a slow spring. The leaf lettuce is coming along and the bugs on the kale are very happy and prolific. The peas are taking their sweet time but the swiss chard is close and the radish, well, they grow almost like rabbits.

So here’s to a little sunshine to help the plants make use of all the rain.
Chris Marcucci
Farmer – Sommelier